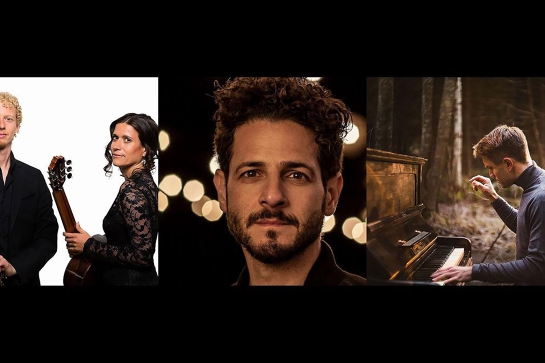 Singer/songwriter, Lior (Attar) is renowned for his beautiful voice and lyrics that radiate truth and sincerity, and as the world searches for compassion and understanding, the importance of music as a means of communication cannot be undervalued. In this musical narrative of love, loss and compassion, Tinalley and Lior perform a new song cycle by Melbourne composer, Ade Vincent. Three of Dvorák’s rousing love songs from his collection of Cypresses; echoes of love cherished, tormented and forgotten, are paired with Barber’s haunting ‘Adagio’ from his String Quartet Opus 11 and Lior’s achingly haunting ‘My Grandfather’. In a ﬁ nal quest for peace, Lior and Nigel Westlake reimagine Sim Shalom (Grant Peace) from ‘Compassion’, merging the symphonic world with that of the string quartet.

Lior burst on to the Australian music scene in 2005 with his stunning debut album “Autumn Flow”. Recorded and released entirely independently, the album became one of the most successful independent debuts in Australian history with sales surpassing Platinum.

Internationally acclaimed for its ‘addictive sound’ and ‘intuitive’ music making, Australia’s Tinalley String Quartet has established itself as one of the ﬁ nest string quartets of its generation since forming in 2003. Awarded First Prize at the 9th Banff International String Quartet Competition and Grand Prize at the 2005 Australian Chamber Music Competition, the Quartet has performed throughout Europe, America, Canada and Australia to critical acclaim.

“A damn-near-perfect display of incisive and thoughtful music-making.” LIMELIGHT MAGAZINE

Blackbird – Pianistic birdsong from Baroque to the Beatles

Coffs Harbour raised, Adam is now based in Helsinki, Finland. Adam has travelled the world perfecting his pianism and piano repertoire. Adam’s love of the outdoors is heard in folk songs from the forests of Finland and semi-improvised impressions of Australian bush birds performed alongside compositions from more familiar composers.