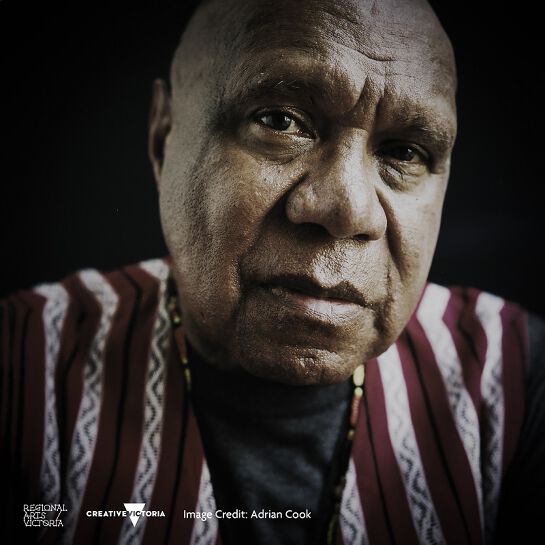 Archie Roach: Tell Me Why

As a member of the Stolen Generations, Roach had a direct line to the pain and suffering indigenous families endured when children were taken from them. He condensed those emotions into a few minutes of music that stands as one of the great Australian humanitarian artistic statements. —The Australian

In the best singer-songwriter tradition, Charcoal Lane is deeply moving in both personal and political term. — US Rolling Stone

Not many have lived as many lives – from stolen child, teenage alcoholic, seeker, lover, father, musical and lyrical genius, to social advocate and First Nations leader – but it took almost a lifetime to find who he really was.

He is Archie Roach.

In recent years he faced the sudden death of his life partner and musical collaborator of 38 years, Ruby Hunter and went on to survive a debilitating stroke and lung cancer.

Forcibly removed at only two from loving parents, six other siblings and his community, Roach’s early years were equally traumatic. He became a teenage alcoholic and drifted into destitution whilst searching for his identity and place.

Tell Me Why, the title of his new Memoir (Simon and Schuster), is an intimate, moving and often confronting account of his resilience and strength of spirit, and also of a great love story. It’s an extraordinary odyssey of love and heartbreak, family and community, survival and renewal – and the healing power of music.

Tell Me Why, also the title of the companion album (Bloodlines), considered Roach’s 18 song ‘magnum opus’, re-imagines eleven songs which have defined his extraordinary career, together with two songs, previously written but never recorded, two songs of early-influence and three brand new recordings.

Roach voices the joy, pain and hope he found on his path through these songs to become the legendary singer-songwriter and storyteller that he is today – beloved and respected by fans worldwide.

A keen observer and soulful poet, Archie’s most loved songs are included here. Some shine a light on dark subjects: the forced removal of children, Took The Children Away, Tell Me Why (feat. Sally Dastey) and Lighthouse, Song For Two Mothers, and about life on the streets, F Troop and Down City Streets. Others speak of the importance of a connection to self and family, Small Child, Always Be Here (also feat. Sally Dastey) and to country, A Child Was Born Here, Nopun Kurongk.

Roach also talks about his struggle to find the will to keep living following the tragic loss of his soul mate and muse, Ruby Hunter, a highly acclaimed singer-songwriter in her own right and the first Indigenous woman to sign a record deal in this country.

Archie has a deep love of his people and indeed of all people. He seeks to build bridges and throughout his extensive songbook penned over the past four decades there is one continual theme running deep and that is LOVE. Love of family, culture, and country and of each other echo through Let Love Rule and Little By Little.

Also included are two songs never previously recorded by Archie, Open Up Your Eyes and Rally Round The Drum. The latter was co-written with Paul Kelly when they toured New Zealand together not long after the release of Charcoal Lane in the early ‘90s and this new album sees the two giants of Australian music re-unite to record it together.

In Archie’s words, Open Up Your Eyes “was the first song I ever penned, written at Galiamble the first time Ruby and I had given rehab a go and were living there as a couple. It was the late 1970s and I was about 19 or 20 years old. During whatever free time I had outside of our chores and the AA meetings, I would have with me a guitar, a pen and a notebook. One time, as I started writing what I thought was a poem, having always loved poetry, I looked down at the words: ‘At fifteen I left my home, looking for the people I call my own, but all I found was pain and strife’. I realised then that writing and words, poetry and prose, has a rhythm to it. I picked up the guitar and started strumming and – bang – it just came, the melody and the rhythm and everything, all at once.”

There are also two beautiful renditions of songs that shaped the young Roach in Hank Williams’ I’m So Lonesome I Could Cry and Mahalia Jackson’s inspired Just A Closer Walk With Thee, in this instance recorded with the truly sublime vocal might of Emma Donovan.

Three brand new songs included are One For Each Person And One For The Pot and The Jetty Song, which pay loving tribute to Roach’s foster parents Dulcie and Alex Cox, and Place of Fire, a place Roach says of love and connection, a place he asks us all to come back to where we will discover there’s more than connects than separates us, a place where we will be one humanity.

Tell Me Why was produced and arranged by Paul Grabowsky, who adds “I’ve known Archie since the mid-90s, and we began working together in 2002, when he and Ruby Hunter created Ruby’s Story for the Australian Art Orchestra. He is an inspiring man: deep, thoughtful, taciturn. His songs ring with clarity, his voice richly textured; it is extraordinary to witness the magic he casts over an audience. We played a concert in late 2018 at UKARIA Cultural Centre, a beautiful room made for music in the Adelaide Hills. Archie told stories and sang and I accompanied him. Afterwards we talked late into the night; he had much to impart, as his memoir was occupying his mind. Everything he says is deeply considered. We returned to UKARIA a few months later to commence work on Tell Me Why. Those days spent with Archie are etched forever on my mind, and this album is my response to the enormity of his story and its resonances, and to the quiet pride and generosity of this remarkable man.”

Roach has been making records since 1990 and along the journey has received many accolades including a Member of the Order of Australia (AM), along with a Human Rights Achievement Award, five ARIAs, and an APRA Lifetime Achievement award. He has shared the stage with Patti Smith, Paul Simon, Joan Armatrading, Rodriguez and the late, great Leonard Cohen.

Tell Me Why, the memoir and the companion album, makes a critically important contribution to the Australian story for us all.