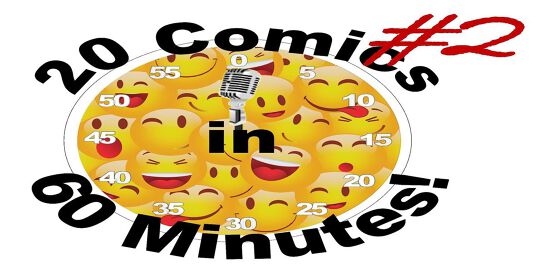 20 Comics in 60 Mins 2 for 1 Comedy Slam is back. Bigger, Better and funnier then ever. It's ours Final 20 Comics Show of 2019 and we're bringing back the belly laughs big time plus Celebrate The Sydney Comedy Festival with BonkerZ, All Front 3 Row Seats and All VIP Non pick on seats are buy 1 get 1 free! (does not apply to single seats). That;s right, bring a date or friend for free. Join Comics from the UK, USA, Australia, Asia and beyond for a night of international laughs and just plain zany stuff..Hosted by USA's Donte D1. 2 shows (7pm or 8:45pm), 1 Day only only, + 15 with paying legal Adult supervisor Celebrating our 13th year of Stand up Comedy Fun. Join us for killer discounts and surprises throughout the year!

BonkerZ Comedy Club is not your standard, run of the mill comedy club, that's why they were the only Comedy Club in Australia, selected for the MasterCards International Priceless Campaign. Killer Acts, Killer Music and the most comfortable and coolest Comedy Theatre in Australia! BonkerZ Comedy Club is located just 1 min from Townhall station and only minutes from your CBD Hotel! BonkerZ also donates a percentage of each ticket sold to the Fred Hollows Foundation as well as The Rural Fire Service of NSW.