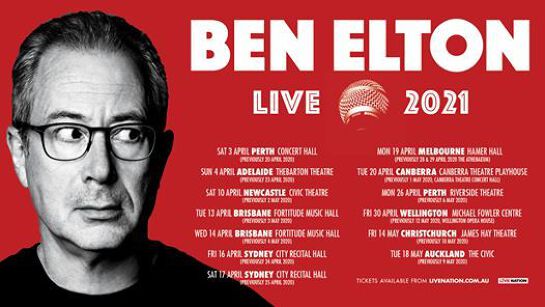 Due to recent announcements by the Australian Governments restricting mass gatherings for an undetermined time period the Ben Elton – “Live 2020” Tour is being rescheduled.

Patrons holding tickets for the performances in Melbourne and Canberra where it has been necessary to make a change of venue will be contacted by the relevant ticket agency. All other tickets remain valid for the rescheduled shows without need for exchange. Patrons unable to attend the new dates can obtain a full refund from the point of purchase. Refunds must be submitted prior to 5pm, Sun 7 June 2020.

For any further ticket inquiries please reach out to point of purchase, or visit: https://bit.ly/3aPJbA4

UK Comedy legend Ben Elton to tour Australia after 15 years! Fresh of the back of a sold-out, 75 date UK tour, Ben will come to Perth, Adelaide, Sydney, Melbourne, Canberra, Newcastle and Brisbane.

As Ben says: "The last time I toured I was still smarter than my phone. Things have definitely taken a funny turn."

A highly respected author, Elton has published 16 best-selling novels, six of which became number one bestsellers. Elton is also widely known for his writing for the stage which includes three smash-hit West End plays and the global phenomenon We Will Rock You based on the music of British rock legends Queen.