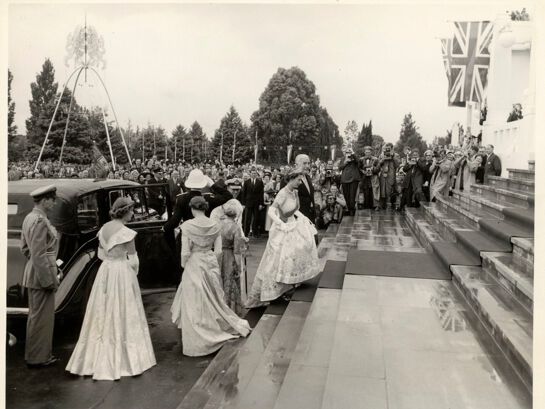 The Queen’s Visit in 1954. The phrase conjures up memories of a young Queen in summer dresses and ball gowns, crowds of Australians excitedly waving flags and charming tableaus spelling out heartfelt messages.
Old Parliament House was central to the royal tour while the Queen was in Canberra. The Queen alighted from the Daimler and walked up the front steps in her coronation gown to rousing cheers. She was escorted through King’s Hall by a very proud Prime Minister Menzies to attend the State Banquet. In her most formal duty, the Queen opened the 20th Parliament in the Senate Chamber. A room in the President of the Senate’s suite was redecorated and furnished for her private use while she was in the house.
Relive the memories of her visit at the Happy and Glorious exhibition. Enter the very room the Queen used while she was at Old Parliament House.