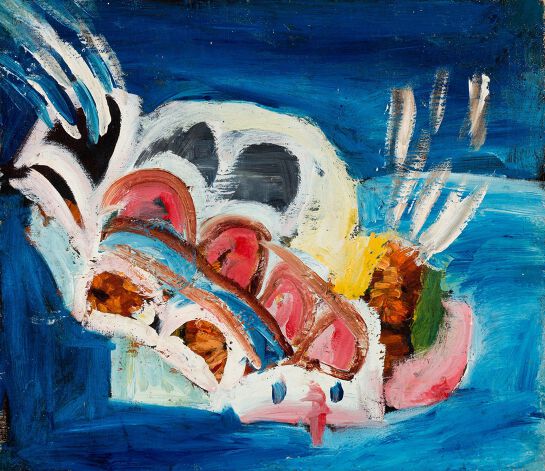 For Sidney Nolan, his boyhood home of the Melbourne bayside suburb of St Kilda was ‘My kitsch heaven’.
The memory of childhood experiences at the beach and out along the pier, cadging rides at Luna Park and absorbing all the free-wheeling possibilities of a community that didn’t quite follow the stricter conventions of the city, fuelled one of his most significant early series of paintings. When the onset of World War II dashed his plans to travel to Paris and become part of the European art world, Nolan was forced to look to immediate and familiar surroundings of Australia.
Stationed out in the wheat belt he painted both the wide landscapes that were around him but, using vivid colour and quick expressive strokes, he re-imagined the otherworldly fantastical landscapes of the Ferris wheel, the roller coaster and the pier by the sparkling sea. In this first of a series of displays within the Nolan Gallery that seek to tell a focused story, two key works from the Foundation Collection are joined for the first time by four earlier St Kilda paintings from Heide Museum of Modern Art.
In an extraordinary twist of historical fate, the Merry Go Round that Sidney Nolan rode on as a child in St Kilda is now located nearby in Civic and has become a much-loved Canberra icon.