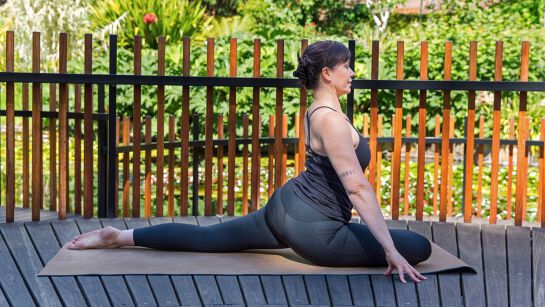 Though menopause itself is simply the moment that menstruation stops, the transition generally takes several years. This phase is called perimenopause and typically occurs in women between the ages of 45 and 55. During perimenopause, fluctuating estrogen and progesterone levels can trigger a myriad of uncomfortable symptoms. Among the most common are hot flashes, anxiety and irritability, insomnia, fatigue, depression and mood swings, memory lapses, and an erratic menstrual cycle.

Before the onset of perimenopause, a woman’s menstrual cycle is set in motion each month by the hypothalamus, a small structure at the base of the brain that regulates many bodily functions, including appetite and temperature. The hypothalamus signals the pituitary gland to produce important hormones for reproduction, and those hormones in turn stimulate production of estrogen and progesterone in the ovaries.

During perimenopause, the ovaries and pituitary gland engage in a kind of tug-of-war. The ovaries decrease hormone production, while the pituitary gland, sensing low hormone levels, continues to spur on the ovaries. This frenetic struggle causes erratic hormonal fluctuations-too much estrogen, which revs the body’s motors, followed by spikes of progesterone, which slows the body.

One of the most common (and mysterious) symptoms; nearly 80 percent of all women experience them during perimenopause. Characterized by a rise in core body temperature coupled with a rapid pulse rate, these “power surges” produce a blushing that begins in the face and spreads down the neck and arms. No one really knows what causes hot flashes. Some say the hypothalamus plays an important role; another possibility is that the hormonal fluctuations in the body irritate the blood vessels and nerve endings, causing the vessels to over-dilate and producing a hot, flushed feeling. Most researchers (as well as many menopausal women) agree that stress, fatigue, and intense periods of activity tend to intensify these episodes.

During perimenopause, estrogen spikes (or progesterone plummets), causing anxiety, nervousness, and irritability. Adrenal glands that are exhausted and overtaxed can also produce bouts of anxiety and intense irritability. (Many alternative healers believe that the adrenals can wear themselves out by constantly responding to stress, a poor diet, and lack of sleep.)

When a person is under stress, the sympathetic nervous system responds by accelerating the heart rate, slowing down the muscles of the digestive tract, and increasing blood circulation to the brain to fight the stressor. Once the stress dissipates, the parasympathetic nervous system responds by doing just the opposite-slowing the heart rate back to normal, stimulating the smooth muscles of the digestive tract, and bringing the body’s systems back into balance.

Of all the symptoms women complain about during perimenopause, fatigue is second only to hot flashes. Plunging progesterone could be the culprit, especially if the fatigue is coupled with depression and lethargy; if a woman feels inexplicably weary for days or weeks on end, depleted adrenal glands could be part of the problem.

Long periods of fatigue, coupled with a melancholy attitude or a sense that the life we once knew is now over, can trigger bouts of depression. Too much progesterone (or a drastic drop in estrogen) can also contribute to everything from a bad case of the blues to severe clinical depression. But yoga practitioners have long known that everything you do with your body can affect your thoughts and attitude. Sometimes something as subtle as a shift in posture can lighten a dark mood.