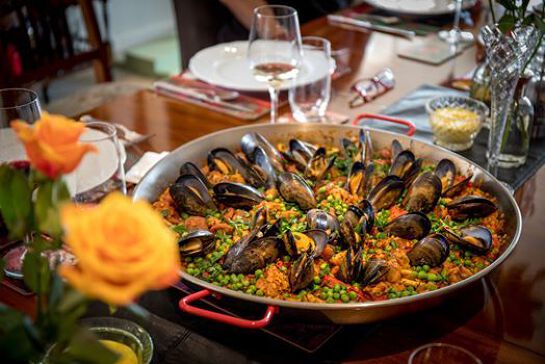 Learn to cook some classic Spanish dishes, tortilla, pulpo, paella, drink some Spanish wine, starting with a glass of Sangria! Learn, taste, smell, cook and enjoy the diversity of the flavours of Spain in this culinary journey. Each region of Spain has its own distinct regional specialities, so the culinary variety is vast. In Donostia-San Sebastián, up north in the Basque region, the ‘pintxos’ are the what is called ‘tapas’ in other places.

The pintxos dishes we cook in class are shared at the table, similar to ‘on the bar’! The variety of pintxos is endless and so our selection varies with the seasons. Scallop ceviche with cucumber jelly, red and green gazpachos, ajo blanco, a white garlic and almond soup, and Spanish octopus, pulpo, tortillas, such as the potato omelette, tuna stuffed peppers, stuffed mushrooms and mini bread rolls filled with countless variety of fillings.

For the main ‘event’, you learn how to make the best Paella, the famous Spanish rice dish hailing from Valencia, located on the east coast, the ‘home of Paella! There are countless versions of this dish; we make Paella Mixta with saffron, chicken, meat and shellfish. It is always an impressive, colourful, popular, low-key dish that's perfect for casual entertaining and parties! We always serve it, at the table, in the paella pan, to enthusiastic sighs of appreciation.

You will learn about the one of the secrets to making a great paella is the perfecting of the socarrat which is one of the most important keys for fabulous flavour. To accompany the paella, you make a delicate saffron aïoli, a rich and creamy garlicky, saffron flavoured, egg mayonnaise.

And for the dessert dishes think of a Tarta de Santiago de Compostella, flourless, almond tart, or a crema catalana, an orange and cinnamon infused crème brûlée style custard.

Walking along the Camino de Santiago de Compostela, the ancient pilgrim path known as Camino Francés in northern Spain, as I have done, one experiences a special, meaningful, mystical and spiritual journey. Each person knows, or finds, their own purpose along the way. My purpose on this journey included a learning, culinary experience, as well as the mystical.