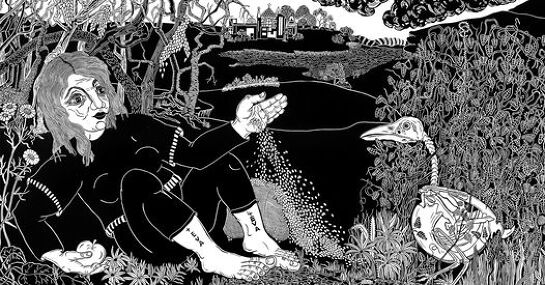 Features over 30 Artists from Gippsland and beyond

Concerned Artists Resisting Extinction (CARE) are a group of artists saying no to Australia’s shocking species and biodiversity loss. They have come together to shock the audience through their diverse art practices. This exhibition is not your usual pretty picture show, on the contrary, it is frank, and it hits hard. These artists are angry. You might even say they are furious.

The idea that we can plunder our natural world has proven to be nothing more that foolish human ignorance and stupidity. Scientists have been warning us for years that our unsustainable practices and domination over the natural world would one day bring the system crashing down around us.

Our total disrespect for the other creatures that share our world has resulted in a dying and unliveable planet. If humans knowingly want to throw themselves like a bunch of lemmings off a cliff, then so be it. But, taking out the innocent bystanders in the natural world, is unforgivable.

CARE formed in 2019 to bring attention to the International Union for the Conservation of Nature Red List of which 86 Australian animal species are considered Critically Endangered. The out of control deforestation and feral introduced species that has occurred in Australia over the last 200 years has brought our wildlife to the where it is now.