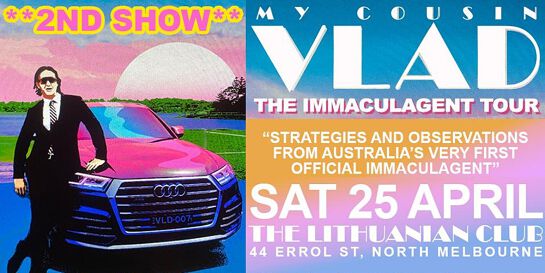 Storming onto the scene in the most immaculate way, My Cousin Vlad, is Australia's 1st self proclaimed Official Immaculagent.

A true comedy renegade, storming onto the scene in the most immaculate way, My Cousin Vlad, is Australia's 1st self proclaimed Official Immaculagent. His online compact 1 minute sketches and videos have earned him a notorious reputation online and in the streets. Inventing new slang words, an All-English clothing swagger, impeccable negotiation skills in Real Estate (his day to day career) and a following with incredible support and engagement.

With many comparisons pointing to Guido Hatsis, Nick Giannopoulos, The 12th Man & SuperWog, My Cousin Vlad brings the funniest parts of the European culture twisted with modern corporate professionalism in the most unpredictable way.

Vlad takes his online mannerisms and observations on the road this April stopping in Sydney & Melbourne, presenting his 10 Strategies for Success and General Observations of popular cultural. His online work has secured him dozens of interstate presentations to some of Australia's biggest companies, with demands to bring a show on the road, Vlad is ready to wrap, stitch & plug to the point where people are gonna lose it.